He enjoys horseback riding, hiking and running with his family in his spare time.  He loves running marathons and ultra-marathons and hopes to someday complete a 100 mile race.  He enjoys all of the different parks and hiking trails our area offers and looks forward to exploring them more.

His family includes his wife,  Sara  and a son, Wyatt.  Other family members include three dogs – Einstein, Waggy Tail, Fluffzilla and 2 cats – Smokey and Echo and 2 horses – Pete and Gem. 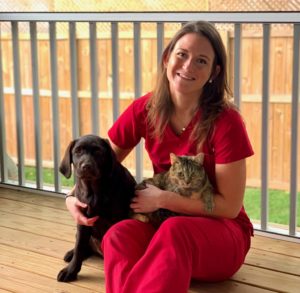 Dr. Ashley Heslop graduated from the Royal Veterinary College in London, UK in 2016. After moving to Greenville, SC she worked at a small animal clinic until fall of 2021. She joined Fountain Inn Animal Clinic in October 2021.

Dr. Heslop is originally from Bermuda, but has always loved the Carolinas. She grew up competing in equestrian sports. Currently, Dr. Heslop enjoys staying active with spinning and CrossFit. She has a Labrador puppy named Camden, a cat named Izzy and a horse named Friday.